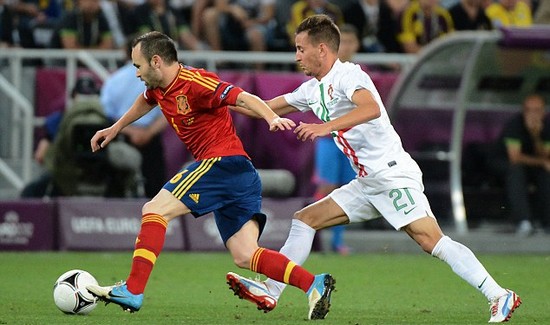 Midfield maestro: Iniesta gets away from Joao Pereira

In the first half of normal time both teams were at least trying to be ambitious. They just couldn’t find any fluency. Spain perhaps had the better chances as Alvaro Arbeloa and
Andres Iniesta despatched decent opportunities over the bar from 18 yards or so. At the other end, meanwhile, Ronaldo drove one shot inches wide of Iker Casillas’ near post.

Second-half substitutions by Del Bosque indicated two things. Firstly that the Negredo experiment hadn’t worked as he was replaced by Fabregas in the 53rd minute and, secondly, that his faith in Torres has dwindled. When two more attacking players were sent on, they were Pedro and Jesus Navas.