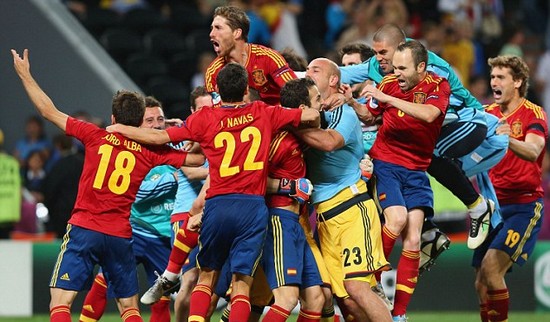 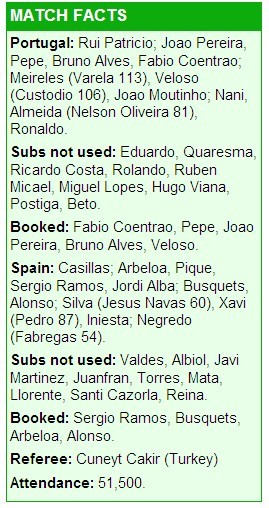 However Portugal’s decision to leave captain and leading goalscorer Cristiano Ronaldo to last in their order of takers will surely come back to haunt coach Paulo Bento and the Real Madrid star himself.

With both teams missing their first-kicks - Xabi Alonso and Joao Moutinho seeing their efforts saved - the shootout stood at 3-2 to Spain when Portugal central defender Bruno Alves slammed his kick against the underside of the bar.

This meant that Ronaldo was left stranded - presumably as Portugal’s fifth taker - on the halfway line as Fabregas stepped up to seal Spain’s progress to a final date against Germany or Italy in three days’ time.

What is particularly baffling is that Ronaldo used to take penalties for Manchester United. For him and his success-starved country, this is an inquest that will go on for some time.

After the hype, the talk and the expectation, it was such a shame that the majority of this occasion lacked drama and excitement. It almost goes without saying that it lacked notable activity on the field.

Certainly, it was a tense night. These ones always are. It was also niggly and petty at times, though, as the creativity and natural exuberance of many of these players slowly succumbed to often basic attempts to prevent the opposition