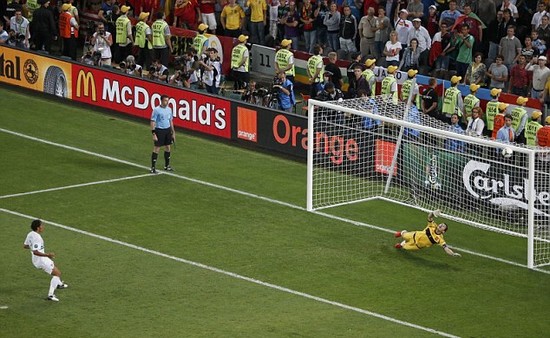 So near... Bruno Alves (left) hits the crossbar with his penalty in the shootout

Things certainly weren’t helped by the fact that the stadium wasn’t anywhere near full.
There weren’t even enough people in the VIP areas for the rather tiresome ‘Respect’ collage to work properly. It’s hard for people to hold up coloured bits of paper when many of the seats are unoccupied.

What was particularly unfortunate on Wednesday night was that, as Donetsk is so far east and travel and hotel issues so hard to overcome, there were very few Spanish and
Portuguese supporters in the ground. This is an issue that UEFA must address before the next tournament in France in 2016.