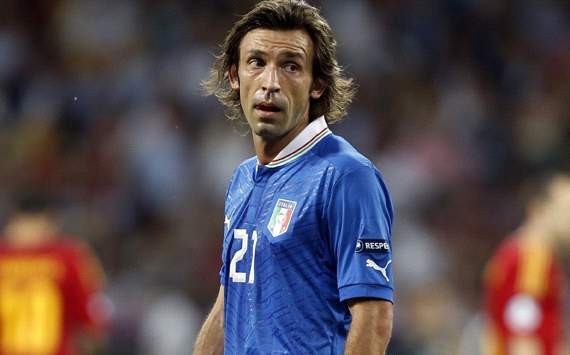 Juventus midfielder Andrea Pirlo has declared that Spain are the only team Italy cannot match, after the Azzurri were beaten in the final of Euro 2012 by Vicente del Bosque's side.

Cesare Prandelli's men were beaten 4-0 by La Roja on Sunday, while the two sides recorded a competitive 1-1 draw in the first game of Group C.

Pirlo stated that he is satisfied with Italy's campaign this summer, but admitted that his side are unable to cope with the Spanish approach to the game.

"Perhaps Spain are the only side we are not yet able to match in terms of circulation of the ball," Pirlo told Gazzetta dello Sport.

"This was a great tournament until the final, where we were not up to standard.

"My role in the tournament? I do not want to talk about that. When we lose, the entire team loses. There is no point in talking about this player or that player."

Giorgio Chiellini and Thiago Motta both picked up injuries during the final, with the Brazil-born midfielder's hamstring problem forcing the Nazionale to play the last half an hour with 10 men as Prandelli had already used all three substitutions.

"We were very unlucky in the final: a lot of physical problems, missed chances and had 30 minutes with 10 men.

"Those injuries are not unusual when you play so many matches in such a short amount of time, especially at the end of a long season."

The 33-year-old then spoke of his delight that Prandelli will remain at the helm of the Azzurri, who will now turn their attentions to the World Cup 2014 qualifiers.

"It is only fair that he continues," Pirlo added. "I am happy that he will stay. His work is there to see."