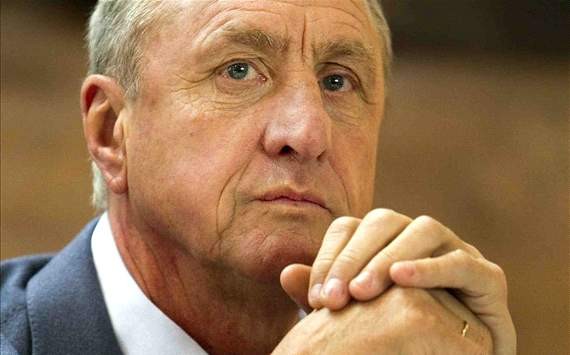 Spain defeated Italy in the final to win the tournament.

at Ajax and reached the final of the 1974 World Cup with Oranje, but this year he saw his country

finish bottom of Group B in Poland-Ukraine with three defeats from three.

However, he had positive reviews for the two nations that contested the showpiece in Kiev on

Sunday evening, especially for Cesare Prandelli's side who abandoned their usual defensive set-up

in favour of an attacking approach.

"During the tournament I really enjoyed Italy, even more so because you don't expect this from

them,” he wrote on De Telegraaf.

“It's a great job from the Italy coach, who dared to play a new style. It's fascinating to see how the

Italians became better every game. Because of that Andrea Pirlo became so good he could pass

the ball to three players instead of just one,” he explained.

La Roja, however, won Sunday’s final 4-0 to become the first side to retain the European

Championship having won Euro 2008. While Cruyff admitted that he admired Del Bosque's

qualities, he believes that playing with two holding midfielders hurt the team.

"I'm also a big fan of Vicente del Bosque, even if I don't always agree with his choices,” he wrote.

“His decision to play with two defensive midfielders was hard for Xavi and Xabi Alonso, who had

trouble because they had a player less in front of them.

“They had to play the ball too often to the side instead of to the front. That's also the reason why

Spain had a lot of possession in midfield. They controlled the way to play with a simple ball, which

is still a great weapon because of the ball speed.

“What I like about Del Bosque is that he changed his tactics when it looked like it would go wrong.

That's why he changed his tactics sometimes three or four times during a match. He's a real

“As Spain showed this tournament, it's the hardest way to play simple football."