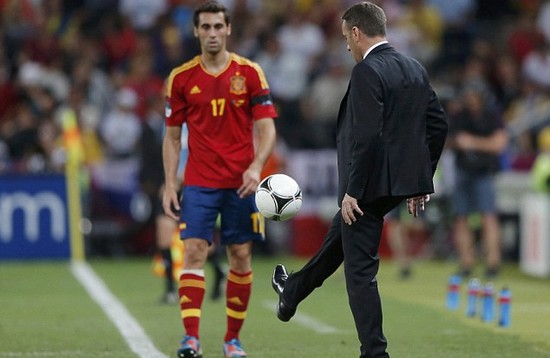 Rolling back the years: Portugal boss Paulo Bento juggles the ball on the sidelines

Perhaps Spain coach Del Bosque’s decision to choose one of his more unheralded forwards to lead his attack didn’t help the world champions’ cause.

After all the talk before the game about whether he would play with a No 9 - Fernando
Torres - or a ‘false nine’ - Fabregas - the Spain coach surprised everybody by playing a No 11 who once almost signed for Hull City. Little has been said or heard about Seville striker
Alvaro Negredo. Nevertheless it was Negredo - for whom Phil Brown bid £12m as manager of Hull in 2009 - who was given the job.