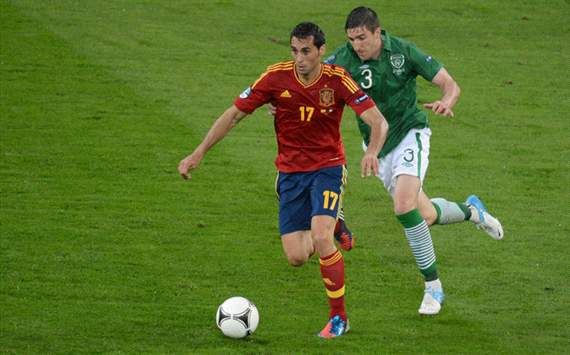 La Roja were accused of being 'boring' during Euro 2012, with some pundits claiming that their possession-orientated style of play, Tiki-taka, had lost its incisive edge and become monotonous.

However, Spain issued the perfect riposte as they became the first side in history to win three consecutive major international tournaments by blitzing Italy 4-0 in the final.

"We are accustomed to the criticism," Arbeloa told AS. "It happened to us in the World Cup after losing to Switzerland [in their opening game].

"But we have always had great confidence in our style and that is what has led us to victory [in Poland and Ukraine].

"We have our style and it has been criticised. There are many ways to play good football, but the important thing is that the national team has an identity; a style that has taken years to hone, but that is the formula that has brought us this success.

"I hope when things are not going so well, we will remember this and continue with this style."

Arbeloa drew plenty of plaudits for his performances at the Euros and the Real Madrid right-back admitted that his country's triumph had been the perfect end to a magnificent season for him.

"It's been a tough year with many goals and a lot of pressure, but we accomplished what we wanted: a league title with Real Madrid - perhaps the club's best ever - with record points, and Spain have achieved what no side had ever achieved before," he mused.

"It was a great year for me and now I have to rest; to disconnect mentally, which is the most important thing.

"Next season will offer new challenges but for now I just want to take a break."

Arbeloa, who has been capped 41 times by his country, arrived at the Santiago Bernabeu from Liverpool in 2009.