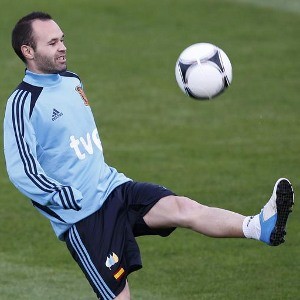 Walking down the aisle to get married this weekend will be much more nerve-racking than playing in Euro 2012, said Spain's Andres Iniesta, who was voted the best player of the tournament for his cool, commanding performances.

"It will be a special and different day," the Barcelona midfielder told a news conference on Wednesday.

"I am sure it will make me nervous, much more than being on the field of play."

The 28-year-old, who calmly slotted away a spot kick in the semifinal penalty shootout against Portugal, helped world champions Spain to get a second successive European championship triumph with a 4-0 final victory over Italy on Sunday.

"I am pleased for the personal recognition," he said in reference to Uefa's best-player award. "But one player does not represent a championship. My colleagues deserve it as much as I do."