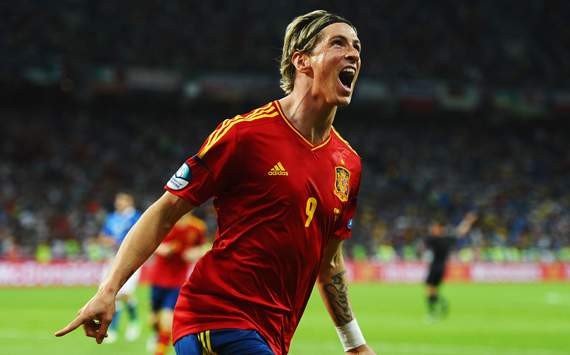 Chelsea striker Fernando Torres has admitted that winning Euro 2012 with Spain helps to make up for what he described as a "complicated" season.

The 28-year-old struggled for form for both club and country in 2011-12, but was able to add the Euro title to FA Cup and Champions League triumphs.

On top of winning the Golden Boot award, Torres became the first player to score in two European Championship finals, and he did not hide his happiness to have had the chance to silence his critics.

"It was a complicated season for me," he told Guardian. "It does not mean it was bad, far from it, but it was complicated with very difficult moments for me.

"But to see my family happy after the final, you see whatever happened during the season was worth it.

"I will leave the poor memories behind and just remember the three titles, with this final against Italy so beautiful for the team, the whole country and everyone who follows Spain.

"After a year that was so tough, and during which we suffered so much, it made it all worth it.

"I am sure the Chelsea fans will also be happy. Now I have to rest and make sure I am ready for next season, which I am sure will be full of great moments. At least, I have to think like that."

Despite scoring three goals at the Euros, Torres had to settle for a place on the bench for three of La Roja's six matches, as he fell victim to Vicente del Bosque's preference for using Cesc Fabregas as a 'false nine'.

"I didn't have as many minutes on the pitch as I used to in previous tournaments, but these are the finals where I scored the most goals," he continued.

"Football throws up these things. Playing in a national team like this gives you the chance to make history. We have won two Euros now and I'm so happy and proud."

La Roja made history by becoming the first team to win three international competitions in a row, but Torres has warned that they may not stop there.

"There is a lot more left for this team to achieve," the Chelsea man added. "We have a lot of ambition and targets ahead of us.

"We will enjoy the celebrations, of course, but our heads are already turned to the Confederations Cup [in 2013] and the World Cup [in 2014]. I hope the majority of this squad can be there.

"It has not been easy. To win three consecutive major tournaments had never happened in the history of the game, so we have to value it. The numbers say this team is the best.

"But, luckily, we are not finished yet. Of course I want more. It is clear. When you win, you want more.

"And we are realistic. If you see the age of the team, and the people who maybe didn't have many minutes on the pitch, then you will see important people for the future.

"They are coming from outside [the team] and there is a lot more left in us for a while yet."