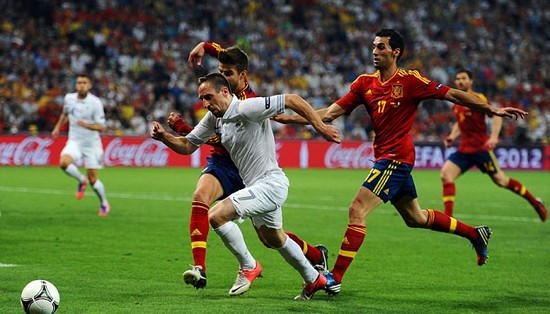 On the run: Spain pair Gerard Pique and Alvaro Arbeloa try to keep up with Franck Ribery

Their best chance came after half an hour when Newcastle United’s Yohan Cabaye saw a curling free-kick saved by Iker Casillas. At the other end, Spain’s midfield players interchanged to great effect. Fabregas was foiled by Lloris when clean through while Iniesta dashed into the box after a one-two with Fabregas before shooting wide.

There was surprisingly little late drama for the neutrals who made up the vast majority of the Donbass Arena to enjoy, even when Nasri made a belated appearance as a 64th-minute sub and Torres entered the action a few minutes later.