France departed the European Championship finals with a whimper on the pitch and a foul-mouthed blast from Samir Nasri after a game in which they rarely challenged the might of Spain.

Xabi Alonso celebrated his 100th cap with both goals to keep La Roja on course for footballing immortality — and it was all too much for Nasri, Manchester City’s title-winning midfielder who came on in the second half but to little effect. 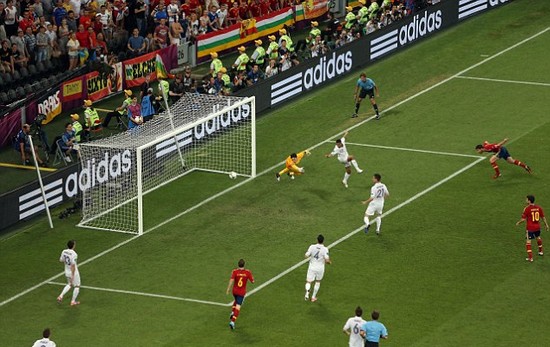 Heading into the last four: Xabi Alonso sees his header fly into the net 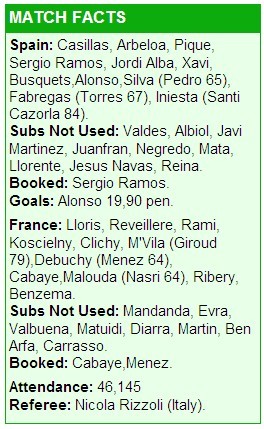 When asked for a comment on the French quarter-final exit, Nasri ranted: 'You’re always looking for stories — go **** yourself.'

He was doubtless frustrated that Spain did not need to be at their best to overcome a disappointingly negative France team in Donetsk and are now just 180 minutes away from becoming the first nation in history to win three major international tournaments in a row.

Playing without a recognised striker, the Euro 2008 and 2010 World Cup winners relied on their Real Madrid midfielder to make the difference in a lacklustre last eight contest.

Alonso converted Jordi Alba’s cross to head Spain in front after 19 minutes and then sealed victory with a late penalty after substitute Pedro had been fouled.

In the ITV studio, former Anfield team-mate Jamie Carragher said of his former clubmate Alonso: 'It sickens me to see him in the red shirt of Spain, and not the red shirt of Liverpool. I’d love to have him back.'