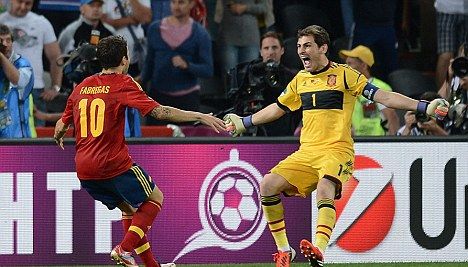 There has been some criticism of the Spanish here in eastern Europe. It has been said they lack their usual attacking spark, and there is no doubt that the loss of David Villa to injury and the loss of form Torres continues to suffer have taken their toll.

But Spain's defensive qualities are often overlooked and in this tournament that aspect of their game under Vicente del Bosque has been crucial to their success.

It has been 900 minutes since they conceded a goal in the knockout stages of a major tournament, dating back to the quarter-final of Euro 2008, and out here they have conceded only one goal - to Italy in their opening game.

In their last two games combined - the quarter-final against France and the last-four meeting with Portugal - Casillas has faced one shot on target. A staggering statistic and something that  certainly highlights the benefit of being able to keep the ball.