Only Mario Balotelli could reflect on a moment of personal triumph, on a night when Italy produced the performance of this tournament so far, and suggest his goal celebration drew envious glances from his team-mates.

Having removed his shirt after that stunning second goal against Germany, Manchester City's striker declared: 'They were jealous of my body.'

In his own rather madcap way he was joking, of course, but it will take more than mere muscle, more than Balotelli's speed and athleticism, to conquer the Spain team Italy will meet tomorrow. 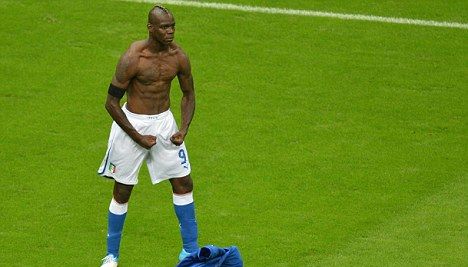 Strike a pose: Balotelli tears his shirt off after scoring the opening goal against Germany

It will be a fascinating encounter. A clash of styles, perhaps, but one that sees the two best passing teams in Euro 2012 meet in a game that is certainly worthy of an Olympic Stadium.

It will bring together the respective brilliance of Andrea Pirlo and Xavi Hernandez, Daniele De Rossi and Andres Iniesta, Gianluigi  Buffon and Iker Casillas.

It will be a contest between serial medal winners; players among the most successful of the modern era. World Cup winners all over the pitch.