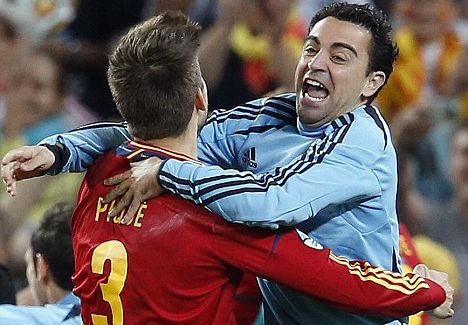 Eyes on the prize: Xavi is hoping to win a second European Championship with Spain

If Xavi is a member of the winning team, he will have one World Cup, two European Championships, three European Cups, six La Liga titles and two Spanish Cups.

The team that started against Portugal in the semi-final boasted 59 major club trophies and 16 international trophies, and that, remember, does not include Fernando Torres, who was on the bench.

Pirlo has been wonderful. On Thursday night in Warsaw Peter Schmeichel described his performance against the Germans as 'art'. But five Spanish players - Xavi, Xabi Alonso,
Sergio Busquets,  Iniesta and Sergio Ramos - have exceeded the 320 passes the 33-year-old has so far completed.