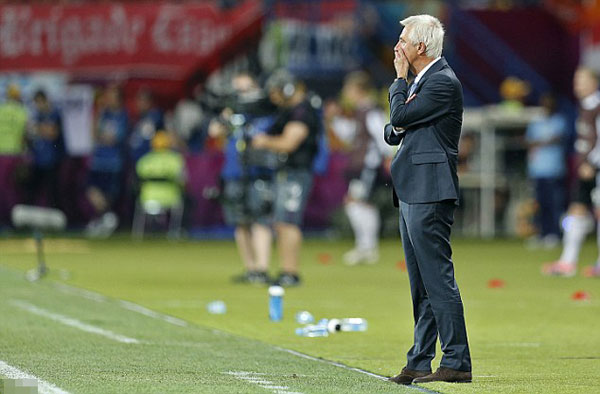 Changes: Bert van Marwijk made some bold decisions at the break

His first goal arrived in the 24th minute and, from a German point of view, it was sublime.

Low’s team drove at a startled defence from deep and as Gomez ran on to  Bastian Schweinsteiger’s pass, the Dutch central defensive pairing of Joris Mathijsen and John Heitinga tried in vain to play him offside. The big forward turned adroitly and beat Maarten Stekelenburg with a sweep of his right foot.

Immediately Dutch shoulders heaved and then sagged. This is not a team that bubbles over with belief. Soon after, Holger Badstuber lolloped forward at a free-kick and headed against the keeper’s knee from six yards. It was hard to see how he had missed but it didn’t really matter, as shortly afterwards the Germans were two ahead.