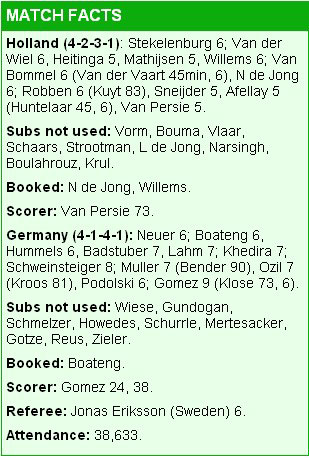 Add that to his difficulties during the opening defeat to Denmark and his tournament has been poor. But this Dutch failure is collective, not individual. Anyone who was here last night will vouch for that.

By the end, Arjen Robben was sitting in a vest by the Dutch dugout. Taken off as Bert van Marwijk’s team were chasing the game, the Bayern Munich forward has been ineffective. As has Wesley Sneijder, anonymous until he was seen arguing with Germany’s Thomas Muller as he left the field.

Take these three out of any team and you will struggle. Add two  central defenders who play as though they have never seen each other before and you really do have a problem.

Van Marwijk said: ‘Early on we had decent chances but the  German goals came out of nowhere. We defended badly. Our offense and defense did not connect.”