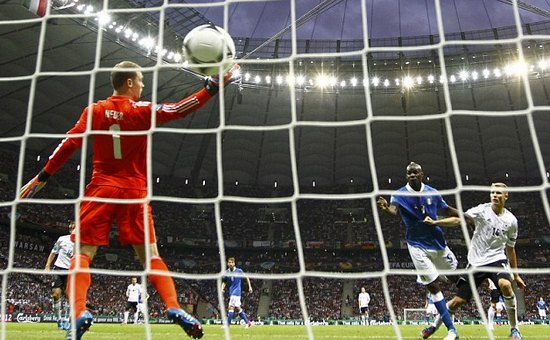 Hands up: Neuer was uncharacteristically slow, letting Balotelli's header past

They managed a consolation penalty, converted by Mesut Ozil after Federico Balzaretti handled in added time, but got no nearer to stopping Andrea Pirlo than England did. The 33-year-old was once again magnificent. In presenting him with the man-of-the-match award, Peter Schmeichel described his display as ‘the performance of the competition’.

Joachim Low asked Toni Kroos to put some pressure on Pirlo and his efforts in doing that clearly dulled the attacking threat that has been so central to Germany’s approach.