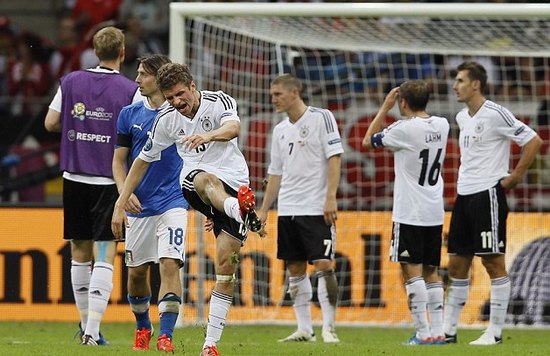 Fury: Thomas Muller shows his frustration as Germany crash out 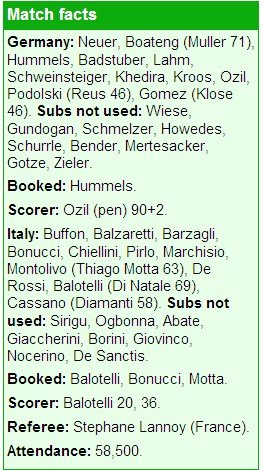 Balotelli frustrates the Italians at times. It was only last summer that Fabio Capello spoke of him as some kind of national disaster.

He was once described by Jose Mourinho as ‘unmanageable’ and there have been times this season when Roberto Mancini must have wanted to see the back of him at City. But last night we were given a glimpse of why Mancini and  Prandelli continue to indulge him and why he might just be worth the hassle.
‘He was excellent,’ said Prandelli. ‘Just like the entire team. A team has to have an idea how to play, and Mario really subscribed to the ideas we had. He is unique, atypical as a striker, but he is always there when called upon.’

‘Why always me?’ asked Balotelli on that infamous T-shirt. The Germans might well ask ‘Why always us’ when it comes to playing Italy.

They have never beaten the  Italians in a competitive match and this time they failed to produce that same ultra-attacking football that had proved so effective in their first four matches.