There is perhaps only one thing worse than losing and that is losing when you think you could have done things differently.

That, however, is the anguish being suffered by Cristiano Ronaldo and his coach Paulo Bento in the wake of Portugal’s exit from Euro 2012 against Spain on Wednesday.

Portugal’s players returned home as heroes. Before the tournament, expectations were relatively low and they have exited the tournament with honour in the eyes of their public. 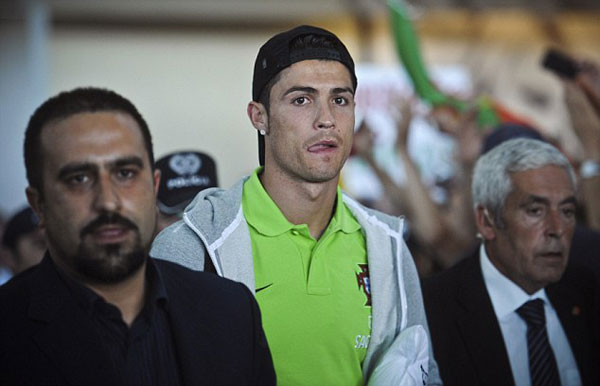 Back home: Ronaldo and Portugal landed in Lisbon to a heroes welcome

Nevertheless the debate over why Ronaldo didn’t take a penalty in the shoot-out Portugal lost to their great rivals in Donetsk continues with the squad’s captain and talisman revealing that he actually wanted to take the first kick but that Bento advised otherwise.

Ronaldo said: ‘The coach is the one to pick penalties takers and I was the fifth. If it was my call I’d be the first.

‘There wasn’t any ghost haunting me after my miss against Bayern Munich in the Champions League this season. But, equally, it wasn’t my decision to take the fifth one.’