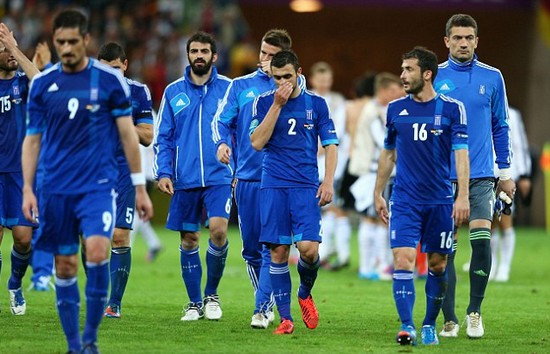 Greek tragedy: Greece are heading home after their defeat to the Germans

But it was his Real Madrid partner Khedira, 25, who stole the stardust. Having been beaten by Samaras at one end, Boateng made amends at the other, his deep cross causing anxiety in the Greek area.

It was justified spectacularly by Khedira who met the ball on the run and delivered an astonishing volley to beat Sifakis.

Six more minutes and Sifakis was beaten again, his flap at a cross enabling Klose to nod in and the little remaining tension in the contest was removed when Reus pounced on a bouncing ball in the 74th minute and smacked it meatily high into the Greek net.

Ten qualifiers won followed by four in four out here. And Germany in another semi-final.