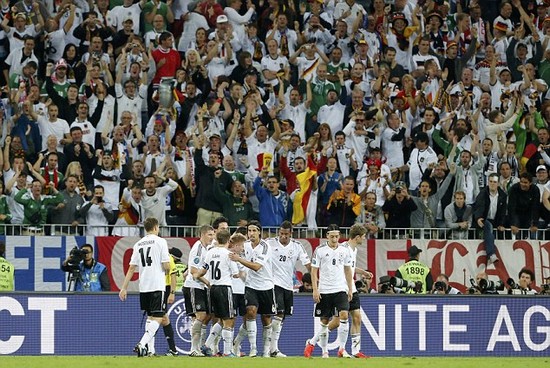 All white on the night: Germany celebrate in front of their fans as they book their place in the semi final

Low then praised England as 'much better than in 2010, less divided, much better organised under Roy Hodgson. They would be very difficult to play against. Italy, too.'

With Angela Merkel perched beside Michel Platini in the stands, the economic background to the two countries' relationship was in the air.

In terms of the match, Karagounis's absence mattered more than Merkel's presence, though the political history in Poland could be seen in the thousands of Poles inside the amber stadium cheering Georgios Samaras's 55th-minute equalizer.

That turned out to be Greece's golden moment, the 'Euro-debt derby' was on. Parity lasted six minutes. But the Greeks once again showed their spirit. In the opening five minutes it seemed as if they would be taken apart.

Low had made changes, dropping Lukas Podolski, Thomas Muller and Mario Gomez. In came Klose at centre forward and behind him were Ozil, 23, Reus, 22 and Andre Schurrle, 21.