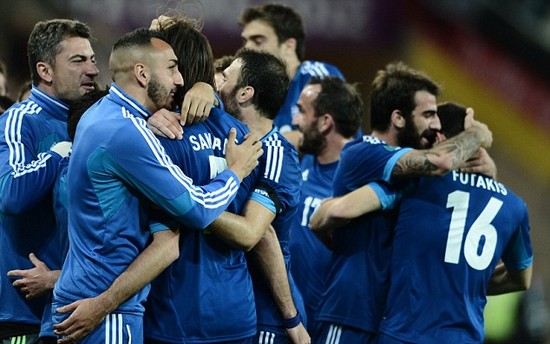 Blue is the colour: Greece came out fighting in the second half, celebrating Samaras' 55th-minute strike

They are playmakers who should force automaton cliches to wilt and they imposed a pass-andweave pattern that did not alter.

Ozil, Reus twice, Klose and Khedira all could have scored before Lahm did. But in the 39th minute Greek resistance was broken.

Bursting past two blue shirts and with the ball sitting up to be hit, Lahm, the left back, used his right foot to drill a swerving 20-yard shot away from Sifakis' despairing hand.

Schurrle nearly made it 2-0 in first-half injury-time but the expectation of a procession was rudely interrupted by Dimitris Salpingidis and Samaras.

The former broke and slid in a low cross that Samaras met just before Jerome Boateng.
The stadium, and Germany, were in shock. It did not last. A devastating 13-minute spell was unleashed during which Ozil swooped and swooned.