A Euro 2012 quarter-final against the Czech Republic awaits in Warsaw on Thursday after Ronaldo scored in each half to send the Dutch home.

The 27-year-old Real Madrid winger was irrepressible as he tormented Holland's defence throughout, ensuring Portugal finished the 'group of death' as runners-up. 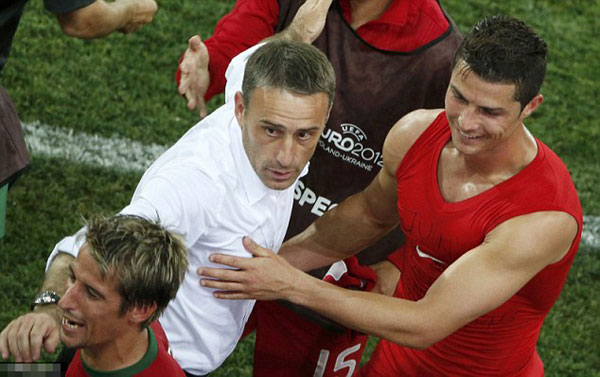 Ronaldo was criticised for his displays in the opening two games at Euro 2012, but despite having overwhelmed the Dutch, Bento was reluctant to shower him with praise.

'The individual effort of players is not important,' Bento said.

'The issue of the effort players show for their clubs and country we have already talked about so much. We have discussed that enough.

'I'm proud of what we've done as a team and satisfied that we achieved our aim brilliantly.

'We have a certain kind of style, identity and ideas. The players put that into practice.

'Today we can talk about brilliance, it was the best game we have played here. We have been loyal to our spirit and that's what we're proud of.'