Are Spain the greatest team of all time? If you dominate so well over such a long period like Spain have and Brazil did, you have to be ranked as the best. Brazil won three World Cups between 1958 and 1970 and now Spain have two European Championships and a World Cup.

It is that longevity of success that makes Vicente del Bosque’s team far better than the Holland team I played for in 1988. Yes, we won the European Championship but that was just one tournament and they have dominated for three in a row. That is exceptional.

Spain’s interpretation of the game is perfect. If they have the ball, the other team can’t score and their passing is fantastic to watch. It is such a good thing that the tournament has been won by an attacking team playing beautiful football. It sends out the right message. 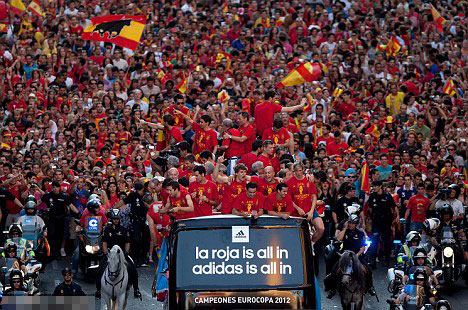 Italy should take credit too for not just putting up a wall and trying to stop Spain scoring. They should be remembered for playing good football in this tournament. Cesare Prandelli has changed their style from the traditional Italian defensive mould and it is being appreciated in Italy.

Some questions have been asked about whether Spain have become boring. Well, if they are, I’d happily settle for boring for a few years. Maybe people are not happy because it has become one-sided. They shouldn’t be. We should enjoy the quality we are seeing.