All smiles: Del Bosque and Casillas enjoyed touching down in Madrid 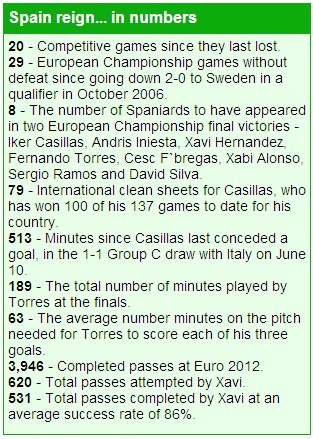 Del Bosque's men destroyed Italy in the final of Euro 2012 in Kiev last night to become the first team to win three successive major international tournaments, including the World Cup.

Torres came off the bench to score the third goal in a 4-0 hammering as Spain added another European title to their Euro 2008 and World Cup 2010 crowns.

The Chelsea striker told Marca: 'You can't ask for more, but it is the work of the team and the togetherness that has brought us here.

'You always want to win more and more, but right now we have to enjoy this. We have won by a distance against a great team like Italy.

'We are very happy. This was the objective that we had at the start of the tournament. We knew we were the opponent to beat, that it was going to be more difficult than ever and it has been.

'We had luck in some moments of the championship but at the end we will reflect on what today means in Spanish football history.

'We have dominated from start to finish and enjoyed a magical evening. Now we can say that national teams of the future will concentrate on us to try and make history.'