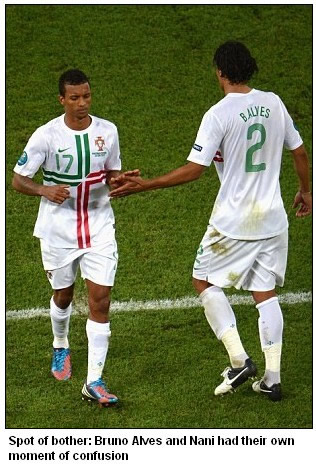 'Cristiano Ronaldo demanded the last penalty,' the winger said. 'I said to the coach I would accept any order.

'It didn't seem to be a problem to me, because penalty shoot-outs are all about luck and we did not deserve to lose like that.'

Nani himself had earlier been involved a bizarre incident with Alves, the Manchester United winger running up and overtake his team-mate as he approached the area to take the third penalty.

The confusion evidently had an impact on Alves who looked shot of confidence as he returned for the fourth, and what proved decisive penalty.

Despite the controversy surrounding the defeat, Nani believes Portgual can be proud of their achievements in Poland and Ukraine.

He added, also in the Daily Mirror: 'I think we can take pride, showed how good we are against the world champions and I believe we warranted our place in the final. But we look good for the future.'