Nani has hit out at Cristiano Ronaldo and accused his country's captain of lying over the penalty debacle in the Euro 2012 semi-final.

Ronaldo has come under attack for not stepping up sooner in the shootout defeat to Spain, which was lost without the Real Madrid man taking his kick after Bruno Alves, a defender, thundered his effort against the crossbar.

The world's most expensive player insists the order was decided by manager Paul Bento, but, reflecting on the heartbreaking defeat, Nani, a former club team-mate at Manchester United, said Ronaldo wanted the glory shot for himself. 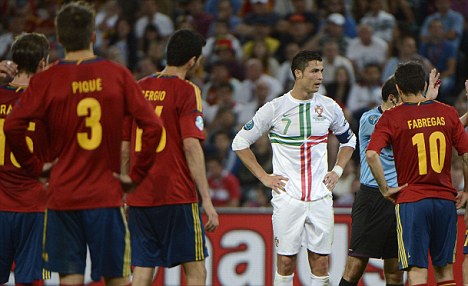 Spare part: Cristiano Ronaldo didn't have any impact on the penalty shootout