Blackburn have made their third signing of the summer, bringing in former Portugal striker Nuno Gomes on a free transfer.

The 35-year-old forward had been strongly linked with the club, who were relegated from the Barclays Premier League last season.

Gomes, who was released by Sporting Braga at the end of last season, will join midfielder Danny Murphy and striker Leon Best in signing for Rovers after receiving international clearance. 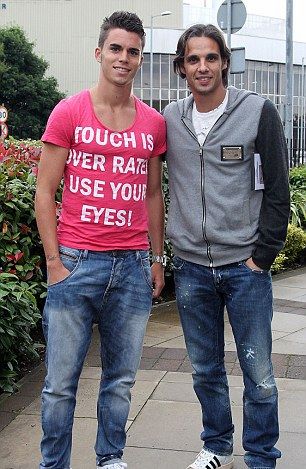 Checking in: Fabio Nunes and Nuno Gomes leave the Bridgewater hospital after their Blackburn medicals

Gomes made 79 appearances for his country, scoring 29 times - including seven at major tournaments.

He peaked at international level with four goals at Euro 2000 as his side reached the semi-finals of the competition.

Gomes played for Boavista and Benfica before earning a 17 million euro move to Fiorentina.

Winger Fabio Nunes is also expected to sign at Ewood Park in the coming days after his medical.
Meanwhile, Rovers are also interested in signing Cardiff City defender Anthony Gerrard.