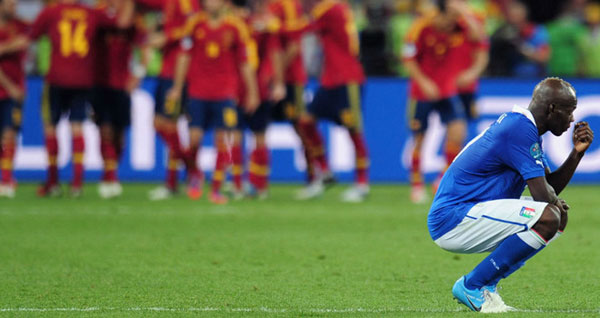 Mario Balotelli: Left to rue what might have been after defeat to Spain

The Azzurri conceded twice in each half as they were overpowered 4-0 by the defending champions in Kiev.

It left Balotelli in despair after he had experienced the joy of notching a brace in the semi-final victory over Germany.

The Manchester City man stormed straight down the tunnel at the final whistle, and angrily shrugged off the attempts of Italian officials to stop him before eventually returning to collect his medal.

"I told Mario that these are experiences you have to deal with and have to accept," said Prandelli.

"You have to hold your hands up and say the opponents were better, accept defeat.

"But you also have to make sure this helps you going forward and you can grow from the experience.

"This has happened to a number of players, and will happen again, but this is what sport is all about."