Spain goalkeeper delighted to have picked up another major title 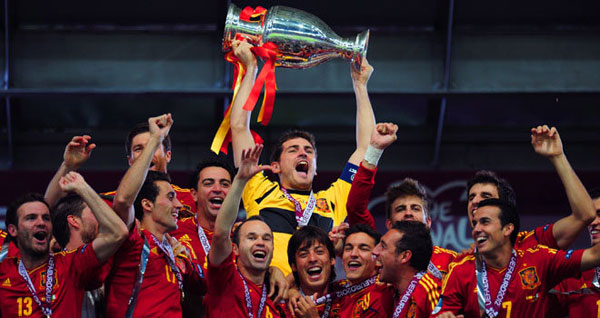 Iker Casillas: Got his hands on another piece of silverware as Spain won Euro 2012

Widely recognised as the best side on the planet, Vicente del Bosque's world beaters cemented that standing on Sunday as they swept the Azzurri aside 4-0.

Spain are now the first team to secure back-to-back Euro titles and the first on the continent to win three consecutive international tournaments.

Real Madrid goalkeeper and national skipper Casillas has been a constant throughout that unrivalled run of success and is honoured to have formed part of a record-breaking squad.

"This is such a truly wonderful moment. The second goal from Jordi (Alba) clinched it really," he told Telecinco television.

"It's been four marvellous years. You might think that a 4-0 margin against Italy means it was easy - but we have been gradually stepping up as the tournament went along."

Spain had been criticised heading into a final date with Italy for being boring, but blew any such suggestions out of the water as they tore into the Azzurri.

David Silva, Alba, Fernando Torres and Juan Mata got the goals, with Casillas delighted to see them perform at their best when it mattered most.

"There will always be some criticism as we have set the bar so high that that's what happens when you come down a pip," he added.

"We have been able to get the best out of our players and make full use of our characteristics. And they (the Italians) were tired.

"Now we will go off and savour the win together."