Italy boss says Spain were fresher than his well-beaten side 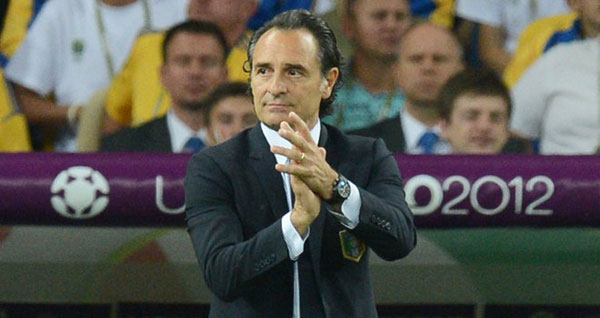 Cesare Prandelli: Believed his players had not recovered sufficiently for the final

Cesare Prandelli praised his Italy side despite losing the Euro 2012 final to history-making Spain on Sunday.

The champions came flying out of the blocks and deservedly took a 14th minute lead via David Silva before Jordi Alba then doubled the advantage four minutes prior to half-time.

Italy - who had used all three substitutes - lost Thiago Motta to injury before late goals from Fernando Torres and Juan Mata sealed the victory.

Despite the loss, Prandelli was pleased after his side surprised many pundits by making the final, following knockout wins over England and Germany.

Reaching the final also restored faith in the national side after their below-par showing in the 2010 World Cup.

"You could tell right away that they were fresher physically," said Prandelli, whose team played in the semi-finals on Thursday, one day after Spain.

"We didn't have time to recuperate, especially against players like these. It became very, very difficult indeed to come back from 2-0 down.

"We came up against a terrific side. They're world champions. Obviously, when you go down to 10 men, the game's over."

Prandelli told Rai tv: "Anyway, it has been a sensational tournament and I pay my compliments to my players.

"We must grow and arrive at these important competitions with the right space during and after the Italian championship."

Italy's captain and goalkeeper Gianluigi Buffon admitted the better side had won.

"Tonight, there was no contest. They were too superior, so the bitterness at losing this final is only relative," he said.