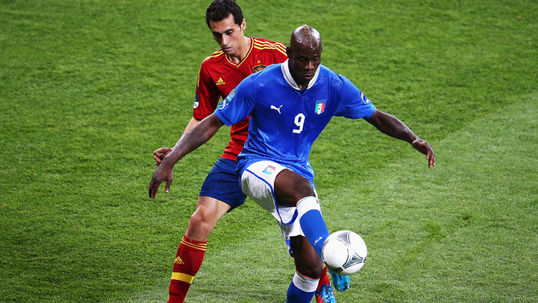 The agent for Manchester City and Italy striker Mario Balotelli believes the footballer will soon be worth €250million.

"But whatever the price, he will stay at City, 200 per cent. It is not that Mario has changed, but the way people around him now see him. That is what has changed."

Raiola was actually speaking just hours before Sunday's Euro 2012 showpiece between Spain and Italy, and it was in response to Balotelli's two goal performance in the semi-finals against Germany.

Balotelli was less impressive during Italy's 4-0 loss in the final to Spain, but the way in which he was widely saluted for his display after the Germany game appears to confirm that the Italian's stock has risen considerably in world football.

This could explain why the player's agent Raiola holds such a remarkable valuation for his client which would easily dwarf the current transfer record fee of £80million paid by Real Madrid for Cristiano Ronaldo.

By not scoring on Sundauy, Balotelli did lose out to Chelsea and Spain striker Fernando Torres in the running to be named as the Golden Boot winner at Euro 2012.

Torres's goal and assist in the closing six minutes of Spain's 4-0 triumph over Italy in the final took him to three goals and one assist for the tournament - level with Germany's Mario Gomez who also has three goals and an assist.

However, Torres took home the Golden Boot prize by virtue of having played fewer minutes (189) at the tournament than Gomez (282).