Wayne Rooney endured a miserable Euro 2012 – the pressure, Steven Gerrard tells us, became too much for the Manchester United star to handle.

Banned for England's opening two games, Rooney failed to live up to the hype on his return to Roy Hodgson's side, scoring just one goal in two very lacklustre displays.

A Champions League, and multiple Barclays Premier League winner, Rooney is unlikely to hold this summer's championships in high esteem. 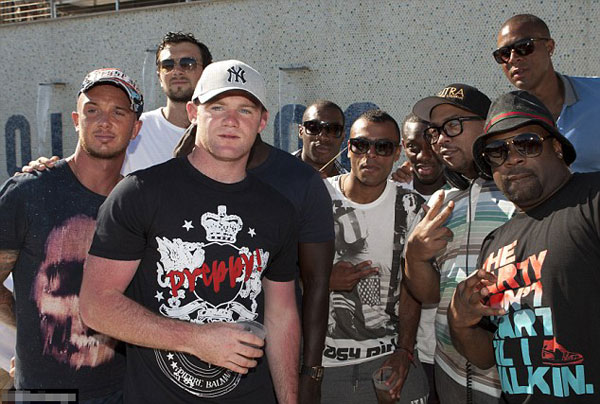 Centre of attention: Rooney is snapped partying with Ireland, Cole, Wright-Phillips and Knight in LA

Perhaps that would go some way to explaining his partying antics in Los Angeles after he was granted an extended break by United boss Sir Alex Ferguson.

On holiday with wife Coleen, Rooney hit a vodka party on Saturday. And, perhaps unsurprisingly, the England ace was surrounded by some rather familiar faces.