Mario Balotelli was reduced to tears in the wake of the Euro 2012 final. The 21-year-old endured a frustrating evening as Spain romped to a historic third successive major international tournament victory.

And unfortunately after the match the ugly side of his game came to the fore once more after the striker clashed with members of Italy's backroom staff.

Volatile Balotelli had had a splendid tournament until that point, most notably when he blasted Italy into Sunday's showpiece with a stunning double to down Germany. 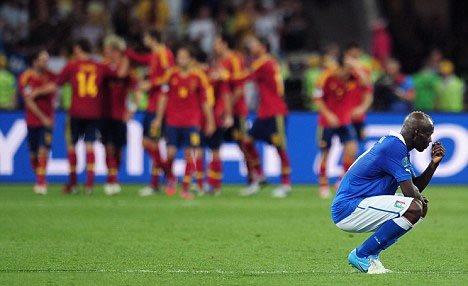 Down and out: Mario Balotelli reacted angrily to Italy's Euro 2012 defeat