To the suggestion that they have turned into something more negative, Spain responded by making history with the highest winning margin in a European Championship final.

To the accusation that they have betrayed their philosophy, this  sensational collection of footballers replied by producing the finest  display of the three major  championship finals they have contested in the past four years. 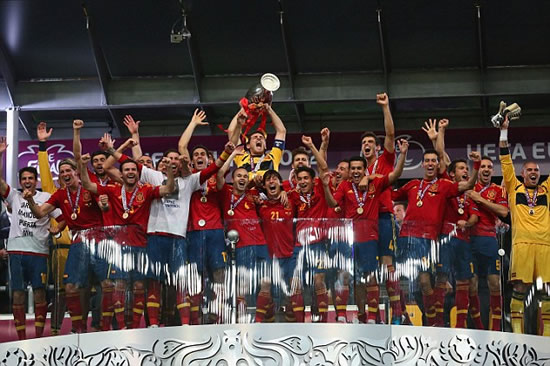 Champions! Casillas holds the trophy aloft after watching his side ease past Italy in Kiev 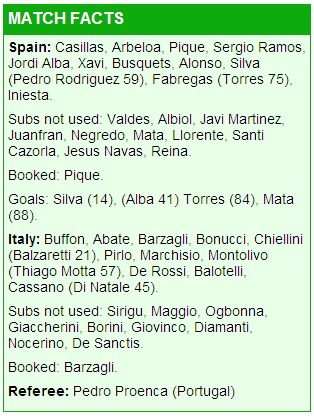 The scoreline was not a fair reflection of what Italy brought to this contest, the loss of Thiago Motta to injury seven minutes after he came on as their third substitute leaving Cesare Prandelli with 10 men for the best part of half an hour. It was only then that they collapsed, conceding late goals to Fernando Torres and Juan Mata.

But before the interval even arrived David Silva and the super-quick Jordi Alba had struck in the best 45 minutes of entertainment we have been treated to at what has been a wonderful tournament.

In that period Italy were excellent, even if the sheer quality of Spain’s passing and movement meant Andrea Pirlo was unable to dominate in the way he had against England and Germany.

When half-time came, Italy had actually had a fraction more of the ball. But, for once, Pirlo found himself chasing opponents not passing around them.

When the pain and frustration subsides, Pirlo might well conclude that this is the best team he has encountered. Possibly the best group of international footballers the world has seen.