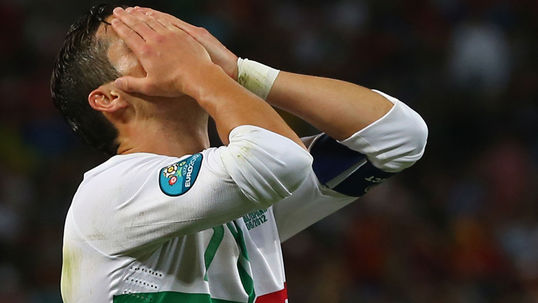 Portugal winger Nani has rocked the boat by accusing skipper Cristiano Ronaldo of lying over the penalty debacle in their Euro 2012 semi-final loss to Spain.

Portugal went out of the tournament after a 4-2 loss to Spain in the shoot-out which bizarrely did not feature their captain and best player Ronaldo.

The Real Madrid ace was penciled down as Portugal's fifth penalty taker but Spain secured the shoot-out win before Ronaldo's number was even called. He would later suggest that the decision to place him fifth in the queue was made by Portugal coach Paulo Bento, but Nani has offered up a different version of events.

In quotes referenced by the Daily Mail, the Manchester United star suggested his former team-mate wanted the glory of potentially netting the winning penalty in the shoot-out by going fifth.

"I said to the coach I would accept any order.

"It didn't seem to be a problem to me, because penalty shoot-outs are all about luck and we did not deserve to lose like that."

Xabi Alonso had the first spot-kick saved by Rui Patricio but Spain's Iker Casillas evened things up by saving the first Portuguese penalty from Joao Moutinho.

Andres Iniesta, Pepe, Gerard Pique, Nani and Sergio Ramos all put away their penalties before Bruno Alves - who had inadvertently stepped up for the previous penalty which was eventually converted by Nani - hit the bar, leaving Cesc Fabregas to put Spain through.