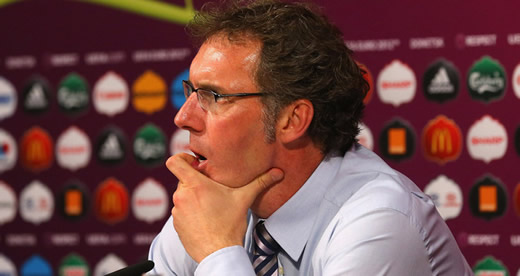 Laurent Blanc is to step down as France coach with immediate effect following their Euro 2012 quarter-final exit.

The former Manchester United defender leaves the role he took up following the nation's shambolic World Cup 2010 campaign, with his contract expiring on June 30th.

Blanc looked to have reunited a dressing room which turned mutinous under former boss Raymond Domenech, with Patrice Evra stripped of the captaincy for leading a training ground rebellion in the wake of Nicolas Anelka's exclusion from the squad.

France qualified with relative ease for the finals in Poland and Ukraine, losing just once in their preliminary campaign before being pitted against England, Ukraine and Sweden in Group D.

They dominated their opening 1-1 draw with England before brushing aside the co-hosts in their second clash to stand in pole position at the top of the group going into their final fixture.

But a shock defeat at the hands of Sweden allowed Roy Hodgson's men to top the pile and left Blanc's men with a testing quarter-final showdown against Spain, in which they suffered a 2-0 defeat to exit the tournament following another poor display.

Blanc, who has been linked with the vacancy at Tottenham, held extensive talks with French Football Federation president Noel le Graet over the past few days.

And the 46-year-old, who won 97 caps for his country before moving into management with Bordeaux, has now decided to pursue an alternative career path.

"During our discussions on 28th June, we were unable to find common ground on the management of the French team for the next two seasons," Blanc said.

"Under these conditions and after reflecting on the matter, I could not but confirm to him, on this day Saturday 30th June, my decision not to ask for my contract to be renewed by the FFF."

And a statement on the FFF website read: "Within the period provided for reflection, Laurent Blanc, on Saturday contacted the president of the FFF, Noel Le Graet, to indicate his decision not to seek the renewal of his contract of national coach.

"Mr Le Graet has acknowledged and applauded the work of Laurent Blanc at the head of the France team since August 2010.

"The executive committee of the federation is meeting on Tuesday but no comments will be made by the FFF and its president before the press conference scheduled at the conclusion of this work session."