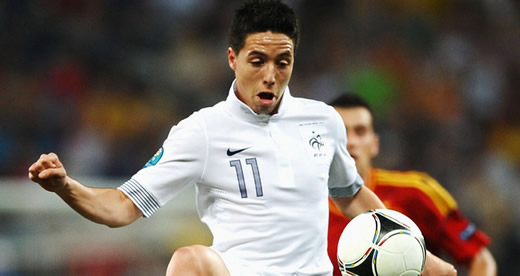 Samir Nasri: Michel Platini says a suspension would be 'ludicrous'

Michel Platini had called claims for Samir Nasri to be suspended for two years for insulting a journalist 'absolutely ludicrous'.

The France midfielder was involved in an angry and foul-mouthed exchange with the media in the tunnel after their defeat to Spain in the quarter-finals.

It followed intense criticism of his performances, which had previously led to him gesturing towards the press box when he scored against England in the opening game of Group D.

The incidents have brought back memories of the unrest in the camp which blighted the side's 2010 World Cup campaign in South Africa, and provoked some to call for a lengthy ban.

But the UEFA president has scoffed at the claims that Nasri should be penalised for his off-field behaviour.

He said: "If I got suspended every time I insulted a journalist I wouldn't have had many caps.

"Whether Samir Nasri deserves something? I have heard talk of two-year suspension but that's absolutely ludicrous."