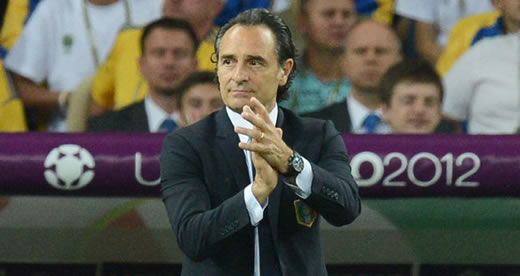 Cesare Prandelli has dismissed suggestions that Spain are boring ahead of the Euro 2012 final in Kiev on Sunday.

It is a label that has historically been levelled at Italy, as their traditional defensive style attracted criticism from many corners of the game.

But under Prandelli the Italians have adopted a more attacking philosophy, meaning many neutrals are hoping for an Azzurri triumph in the Ukraine capital.

Prandelli, however, has laughed off suggestions that his side's opponents are dull.

"Spain are the best side in the world," he said

"They've shown that in the last few years by playing their own way and staying true to their footballing philosophy.

"We've always said they are the side to beat."

And the Italy coach thinks those that criticise the Spanish style are motivated by fear.

He continued: "It's not a case of them being boring.

"It's a fear of seeing the same side always winning and Spain always seem to come out on top.

"They are not boring in any shape or form."

The Azzurri squad arrived at their Kiev hotel to a message of support from Italian president Giorgio Napolitano.

He has also invited the players to a civic reception in Rome on Monday whether they win or lose.

"These are fantastic words. He's conveyed the idea of team spirit, determination and generosity.

"That is what he wants us to convey to the country.

"I am very proud. I hope we can live up to his expectations."