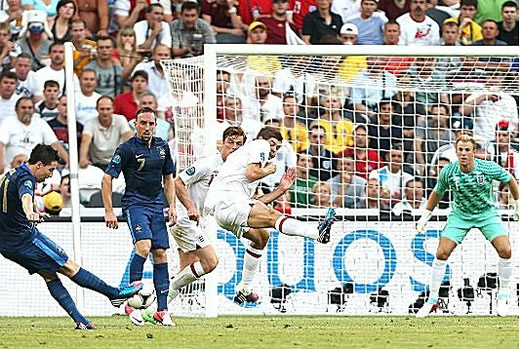 NOT FOR TURNING ... Samir Nasri scores for the French despite Steven Gerrard's best efforts

ENGLAND bowed out of another tournament, left once again to watch how others do it.

HOW to keep possession of a football.

HOW to make the other side work to get it off you.

HOW to pass and move and penetrate.

HOW to play at the level necessary to win a major tournament.

Yet we left with people saying we could hold our heads high.

We had not lost a game and once again were so unlucky with penalties.

After all, we had kept a clean sheet against the Italians and were three kicks away from knocking them out.

But if we accept this level of performance, then we have given up on England.

Have we dropped so far down the pecking order that we are applauding England for trying hard and being well-organised?

That is the least you should expect from any side.

I cannot remember the last time the nation celebrated the team getting out of our group.

That used to be the least that was expected. Now it seems to be a pointer that we are heading in the right direction.

Well, we are not. We are getting progressively worse if you look at our performances in the last three major tournaments we qualified for.

During Euro 2012, I praised certain individuals for doing their jobs well — Danny Welbeck against France, Steven Gerrard in all the group games and John Terry at the back.

But as a team did we really play well against anyone?

A fightback against Sweden papered over the fact that we defended appallingly.

I don’t lay all the blame at Roy Hodgson’s door — he had such little time in the job.

But he should have changed things against Italy to stop Andrea Pirlo running the show.

Perhaps we needed to get Phil Jones on to do that job.

But we needed to change something when it was clear we were being overrun in midfield.

So, once again, we are trying to work out what the others do right and we do wrong. What model should we follow now?

There’s a clamour for small pitches in schools, preventing parents shouting from the sidelines and stopping the practice of putting all the big kids into teams.

All that stuff always comes out.

People often point in hope to younger players coming through.

Yet, in 1991, I was part of an England Under-21 side that won the Toulon tournament.

I was proud to score the only goal as we beat France in the final. Yes, and within seven years our high point was going out of the Euros in the last four — and France had won the World Cup.

But would you bet against us in four years’ time asking why they had not become world beaters?

I wonder why England were so poor. There’s a goalkeeper and three defenders who shared title and Champions League medals between them from last season, another title winner in James Milner, an exceptional midfielder in Gerrard and a world-class striker in Wayne Rooney.

Yet put us all together and what do we get? Players who cannot pass the ball to each other.

Perhaps the problem is we have too many foreign players in the Premier League and not enough English talent gets through.

Perhaps that is the price we pay for having a league as diverse and entertaining as ours.

Perhaps the FA have one plan, the Premier League another and until there is one cohesive idea to get a better national team things will not change.

Perhaps England is not important enough to everyone any more.

Which is why we go home with our heads held high along with the Czechs and Greeks.

Maybe that’s just where we are at.