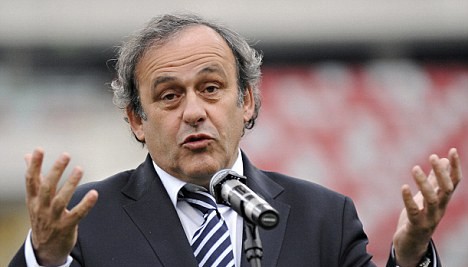 c
Not my problem: Michel Platini won't get involved in disciplinary matters

Yet Michel Platini's comments about UEFA doing everything in their power to get rid of racism do not quite ring true with the fact that fines handed out for those incidents within stadiums were
lower than the £80,000 fine handed out to Denmark's Nicklas Bendtner for ambush marketing when he lowered his shorts to reveal a Paddy Power logo following his goal against Portugal.

'You should ask the UEFA disciplinary committee,' said the UEFA president this lunchtime.

'Because they are an independent body and took their decision I shouldn't get involved.

'I can do a lot at UEFA but I'm not going to interfere in the decision and that's it.'