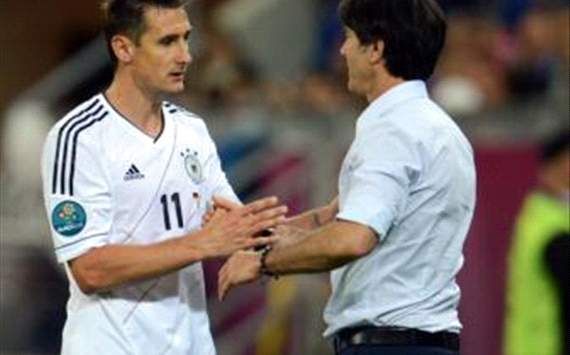 Germany boss Joachim Low has admitted his regret over his team selection following his side’s 2-1 Euro 2012 semi-final defeat to Italy.

Two goals from Mario Balotelli before half-time ensured the Azzurri will face Spain in the final on Sunday despite a late flurry of attacks from Die Mannschaft, which resulted in a Mesut Ozil goal from the penalty spot.

Low made three changes to the line-up following the convincing 4-2 win over Greece in the quarter-finals and the German coach revealed why he made the player alterations.

“In hindsight you can say that one or two things could have been done differently,” he told the DFB's official website.

“Mario Gomez scored three goals in the group and was very motivated after the Greece game because he didn't start there.

“I wanted to have Toni Kroos in central midfield to take [Andrea] Pirlo and [Daniele] De Rossi out of the game.

“That worked at the beginning but after the break I needed to make changes.”

The Italians have surprised most people with their run to the final, although Low expected a tough game on Thursday.

“Italy are of course a very strong team, that we knew and prepared for,” the coach added.

“Our game became disorderly after the first goal which was preventable. We were unsure of ourselves twice in defence and were brutally punished.

“Then it just became difficult to turn the game around. The Italian players are very good tactically. They have two excellent strikers and a brilliant playmaker in Pirlo.

The coach insisted that there were plenty of positives to take from the tournament in the aftermath of their exit.

“Naturally we are very disappointed because we tried with a lot of energy to make the final,” he added. “In hindsight we have to say that we played a good tournament.

“We played a phenomenal group stage and also won our quarter-final. There is no reason after just one game to question everything.

“I have to give the team a compliment, they presented themselves brilliantly at this tournament.

“We have the youngest team at the Euros so I see this as very positive. We had two exemplary years and continued our development.”