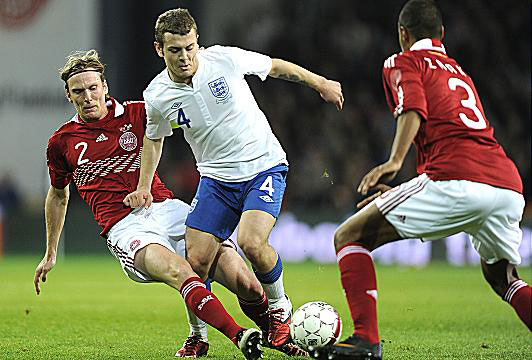 ON HIS JACK ... Arsenal ace Jack Wilshere can tackle England's problems - but he needs help

TOO much pressure is being heaped on Jack Wilshere to be the saviour of the nation.

That is the view of Gareth Southgate, favourite to become the FA’s new technical director.

England’s elimination from Euro 2012 has provoked the usual inquest and an examination about what the future holds.

The return of 20-year-old Arsenal midfield star Wilshere is held up by many as being crucial to England’s progress towards the 2014 World Cup in Brazil.

But Wilshere has not played for a year because of a stress fracture in his right ankle — and there is no guarantee about when he will be fully fit for action again.

Southgate believes England’s obsession with one player being so pivotal to success has to end.

He declared: “I feel we’re pinning so much on Jack Wilshere.

“What we want to be able to say is that there are five or six, not just Jack.

“The expectation, everybody talking about Jack, is putting a lot of pressure on him. I would say that.

“In every era it’s one, isn’t it? For the last five years, it was maybe Wayne Rooney. Now it’s Jack.

“But top countries have five or six, they churn them out.

“Brazil is unique because of the size of the population.

“Yet other countries, like Spain, Germany, and Holland, develop far more players.

“That is where we have to get to. We have to give the manager a bigger pool of players to work with.”

Southgate is not convinced there is a big enough group coming through to take the England senior squad on to a higher level.

He added: “If I look at who was on the bench for Spain and Germany at Euro 2012 and then at various Under-21s and Under-19s, that’s what we have to aim towards.

“Roy Hodgson brought Alex Oxlade-Chamberlain in, who could still play now for our Under-19s, and, of course, there is Wilshere.

“But there are not too many others. If you cried out for a radical change tomorrow, how many of those would really be in on merit?

“Yet I’m just amazed he hasn’t played more for his own club, Birmingham. He will be a good challenger for Joe Hart, though.

“Then there is Danny Welbeck and if you look at possibly Kyle Walker, Phil Jones, Oxlade-Chamberlain, Chris Smalling and Wilshere, you have the basis of something. There are things to build upon.

“Adam Johnson might turn into something special but a lot of that’s in his hands. He realises he needs to play.”

Southgate has been instrumental in making changes to youth football in England by implementing a structure to encourage small-sided games on smaller pitches with smaller goals.

The idea is to encourage better technique among youngsters.

But Southgate argues it is not about slavishly following another country’s model. It is about adding good habits to English strengths.

He said: “Technically, our players are probably better now than when I was playing. The standard has advanced.

“We have to do what is right for our culture. We will not, because of our climate, be able to play at tempo all the time, as Spain or Portugal do. I don’t think we will create those types.

“If you were to align it to any country, the Germans are probably closer to us culturally and in terms of our climate.

“We have to develop players who can adapt, adjust and make decisions on the pitch.

“Other teams come to a tournament and their game awareness is good.

“If there is a game plan, it is put in place and they get it tactically right.

“We talk all the time here about technique.

“But, tactically, their players seem to have a very good understanding of what is expected. They carry things out to the letter. And, of course, there is the balance we always have in our country between cultural traditions and clubs being the lifeblood of the community and then balancing that against elite sport.

“In the end, we will end up with the national team we want.”

As ever, the FA and England have been getting plenty of stick from former players on TV and radio.

Southgate is a pundit himself on ITV but also gets his hands dirty by working for the FA.

He argues that if others are so concerned about England’s future, they should be working within the game too.

But he doubts they are prepared to put the effort in, preferring to continue making their criticisms in the media and putting attempts to complete coaching badges to one side as the task is tough and time consuming.

Southgate insisted: “The reality is, the players have to want to do it.

“Do players want to sit in the meetings I’ve sat in?

“I’ve seen lots of people on Twitter and radio and I know Stan Collymore had a rant the other day.

“There are other people talking about coaching, who have done part of their coaching badges and not finished them.

“If people really want change to happen, we can’t sit there and just wait to be employed.

“We have to make ourselves as employable as possible.

“We’ve made it as accessible as possible to get on to the coaching courses. But lots of players who are retiring now won’t want to coach, because they come to realise the time it’s going to take up.

“It would be great to have more football people taking on roles within the FA.