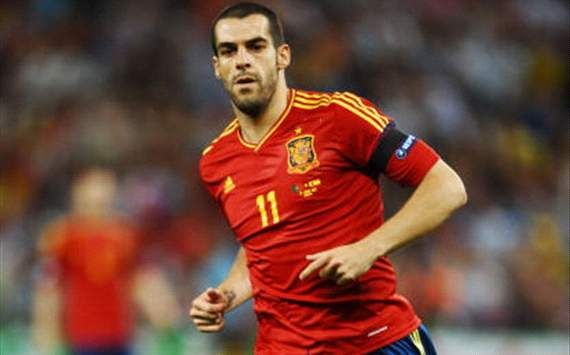 Spain striker Alvaro Negredo has hailed the national team's golden era after they booked their place in the final for a third successive major championship following their 4-2 penalty shoot-out win over Portugal on Wednesday in the Euro 2012 semi-finals.

La Roja are now on course to become the first international team to win three tournaments on the trot after their triumph at Euro 2008 and the 2010 World Cup, and Negredo has called on his side to add another trophy to their collection and create history.

"We are again in a final," Negredo told AS. "This is something that the Spanish people have to enjoy.

"Three finals in four years. You cannot ask for more. This is the time to make history."

The Sevilla frontman was deployed as Spain's No.9 against the Seleccao despite having played just a handful of minutes in the tournament prior to that encounter.

He was replaced shortly after half-time after failing to make an impact, but he still rates the experience as the best of his playing career, while revealing his emotions after finding out he was starting the match.

"I think this is the most beautiful moment of my career," Negredo beamed. "I have been fortunate to win the Copa del Rey with Sevilla, but this is the national team, and it is great to play a a match as important as this one.

"I imagine that it is the same at a World Cup. For me, this could not be a better experience.

"I learned I was going to be a starter during the team talk. The coach said my name and I was surprised at first.

"It took a minute for me to sink in, but then the only thing I was thinking about was what I had to do during the match and I forgot about everything else."