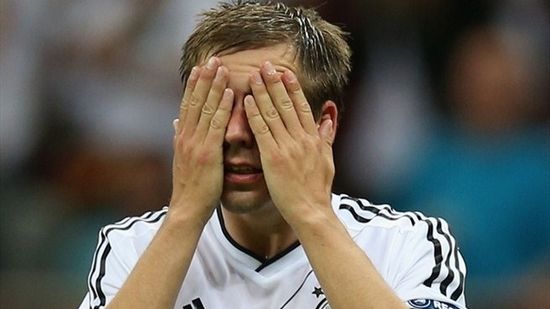 Germany n Philipp Lahm felt Germany had only themselves to blame for allowing Mario Balotelli to score the first-half double that eventually ended their UEFA EURO 2012 dreams in Warsaw, the left-back admitting that, for all the Nationalmannschaft's potential, it is time to start producing tangible reward.

This is very hard for us. We made some silly mistakes and that was the opportunity for Italy to score their goals. In the second half we did everything within our power; we gave our best, but we scored too late. Shortly after half-time we had a great opportunity [Lahm missing the target]. That could have been the chance to get back in the game and to go on and win. But the way in which Italy's goals were scored shouldn't happen.

If you make the mistakes we've made, be it the first or second goal, then you are struggling against a technically skilled team like Italy. We had some goalscoring chances, but maybe we simply weren't lucky today. The team tried everything, but if you make these mistakes and go behind against Italy, it becomes difficult. You could see that today.

Every defeat is bitter and painful, especially if you get this far in a tournament. You always plan on reaching the final, but today we didn't succeed. This is hard as I see a lot of potential in our team. But if you don't manage to call on this potential at the right time or if you're not clever enough in certain situations, then you lose a match like this.

They were very clever. Italy are very experienced in terms of the system they play, and it's hard to play against. They did very well and managed to score the first goal; it was a mistake to give it away and we didn't manage to equalise. The second goal was even worse, and it was hard to find a way back against such an experienced side.

I think we lacked a bit of [luck and determination]; balls bounced off and landed at the feet of the Italians, where it could have landed at our feet, which made it more difficult. We tried to turn things around, which took a lot of effort, and we knew that we would face a few counterattacks, but we had to keep going and we nearly made it. We have a very young and talented team and if every player stays on their path, then the [overall] quality will improve for the next tournament. It's a positive thing that we've had this experience, especially for the players in their first tournament.

It's difficult to find the right words now. We are very disappointed. We didn't imagine it like this. A beautiful season has come to an end. Getting beaten for the fourth time [in a semi-final] is very bitter. It will certainly take some time to digest all this, that's for sure. We all really believed in it and unfortunately once again it didn't happen [the way we wanted]. Congratulations to Italy, they played an excellent match. We didn't.

[Were Germany overconfident?] No, not at all. You go into a semi-final like this, and of course you want to win, so when you lose, it's very disappointing.

There is a very sad atmosphere. Some guys are crying and you can only tell them that they have to keep their heads up. It was one of my bitterest moments, but the hurdle posed by Italy was too high today. We couldn't play to our potential; maybe we showed them too much respect.

For me there won't be many European Cups or World Cups in the future. That's why I'm as disappointed as the rest. It's hard to decide now, but I can imagine playing on for two more years to make amends for today in 2014.