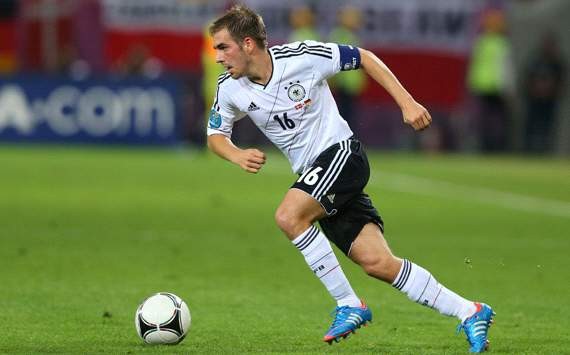 Philipp Lahm believes that Germany only have themselves to blame after two defensive mistakes proved costly in their 2-1 loss to Italy in the second Euro 2012 semi-final.

Germany were billed as tournament favourites throughout the championship and boasted a 100 per cent record heading into the last four, but came up against a Mario Balotelli-inspired Italian side, who will now face Spain for the right to be crowned European champions.

Lahm, who was partially responsible for the second goal when he played Balotelli onside from a long ball, paid for his error as the maverick striker hit an unstoppable shot past Manuel Neuer to add to his earlier header.

The first goal also came after poor play from defensive duo Mats Hummels and Holger Badstuber and Bayern Munich full-back Lahm feels that the whole defensive unit was at fault.

The Germany captain told reporters: "This is very bitter. We made dumb errors and conceded our goals. It is bitter because our team have so much potential."

Lahm also appeared to be fairly self-critical as he chose to reflect on his early second-half miss as a turning point in the game.

With Italy 2-0 up, the 28-year-old shot over after engineering a clear-cut chance and despite Mesut Ozil's last-minute penalty, the Germans could not complete the comeback.

"In the second half, we gave our best efforts," Lahm added. "But we scored too late. I also had a great chance, but it wasn’t enough. If you are behind against Italy and have no luck, it is bad."

Kroos told ARD: "Both goals were easily defendable. But at the end it was not enough. We did not play worse than Italy and we had a lot of chances, especially in the first half."

Germany team manager Oliver Bierhoff, meanwhile, admitted that the contest was over for his side by half-time, but has remained optimistic for the future.

"We blew it in the first half," he told reporters. "We presented the Italians with the chances and did too little ourselves.

"Aside from the beginning of the second half we weren't convincing enough. The team have a lot of potential to grow, though. We believe in the young players. They will take this as a learning experience."