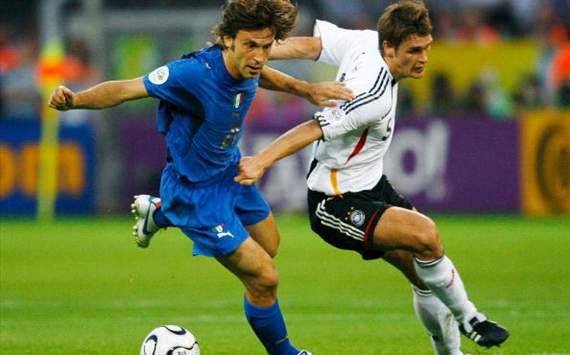 Italy playmaker Andrea Pirlo has warned his team-mates not to get carried away following their 2-1 victory over Germany in the Euro 2012 semi-finals.

The Azzurri put in an impressive display on Thursday evening to see off Joachim Low's men - who had been tipped as favourites for the match - and join Spain in the final.

Italy have performed well above expectations in Poland and Ukraine, but Pirlo insists it will count for nothing if they fail to go on and win the tournament.

"We have not won anything yet," Pirlo told reporters. "[Not to win] would be like going to Rome and not seeing the Pope.

We are convinced that we will have a great match against Spain. But if we want to have a chance to win, we will need to show the same spirit and desire we showed tonight and in the match against England.

"After the 2006 World Cup, we had some problems in the national team because successes were not coming. Now, we have reached the final."

The 33-year-old midfielder also drew parallels between Italy's campaign in Poland and Ukraine and the 2006 World Cup - where they defeated France in the final.

"The feelings are more or less the same," he explained. "There is the same desire to win and also some youngsters who were not in the squad in 2006."