Mario Balotelli's two goals fired Italy into the Euro 2012 final - then he dedicated the double to his adoptive mum.

Balotelli's first-half brace was enough to secure a 2-1 win over Germany in Warsaw, and book a showdown with champions Spain on Sunday.

And at the final whistle, the Manchester City star embraced Silvia, who brought him up from the age of two after he was born in Italy to Ghanaian immigrants. 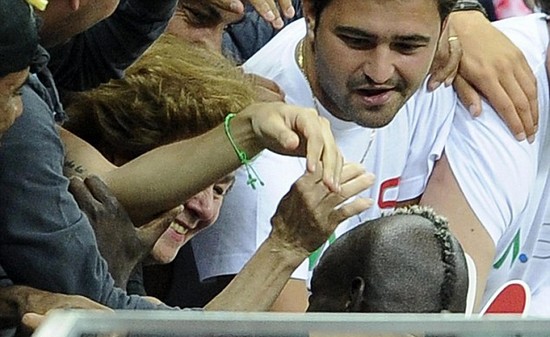 This one's for you: Mario Balotelli embraces adoptive mother Silvia after scoring both goals to fire Italy into the final of Euro 2012

'After the game, when I went to my mum I said "these goals are for you",' he said.

'I waited for this moment for so long and I wanted to make my mum happy. Tonight was the most beautiful of my life - but I hope that this Sunday is even better.'