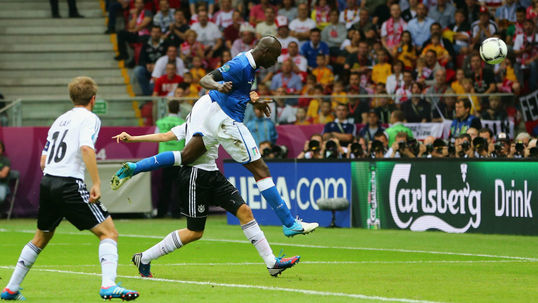 A first-half double from Mario Balotelli sealed Italy's 2-1 win semifinal over Germany sealed a spot in the Euro 2012 final against Spain for the Azzurri.

Then he smashed an unstoppable shot past Manuel Neuer to double Italy's lead and take him joint-top of the Golden Boot standings.

Mesut Ozil's last-minute penalty was not enough to prevent Germany's suffering their first defeat in a competitive game since their World Cup semi-final loss to Spain two years ago.

Indeed, it was their third semi-final loss in their past four tournaments, one of which, in the 2006 World Cup, came against tonight's opponents, who have still never lost to Germany in a competitive game, and now face Spain in Kiev on Sunday.

Germany had started the match as favourites, mainly thanks to their world record run of 15 successive victories.

Having seen how hard England had found it to subdue Andrea Pirlo, it was anticipated they would deal with him much better.

Instead, it was worse.

Sitting deep on the halfway line, Germany allowed Pirlo the time to pick out returning full-back Giorgio Chiellini with a brilliant pass to the touchline.

From there, it went downhill rapidly for Joachim Low's side.

Chiellini nudged the ball onto Cassano, who swivelled past Mats Hummels with the minimum of fuss.

Balotelli immediately got himself some space behind Holger Badstuber and when the cross came, he rose to power the ball home from six yards.

If that was efficient in its execution, Balotelli's second was brutal.

Advancing from deep inside his own half, Riccardo Montolivo could scarcely believe the room he was given.

Twice he looked up to see if anything was on.

On the second occasion he spotted Balotelli making his run, exploiting Philipp Lahm's failure to maintain the offside line.

It took Balotelli a bit of time to get himself into a shooting position.

However, as the ball sat up nicely, he smashed it past Manuel Neuer.

The Germany keeper had set himself to make a save. In the end, there was nothing he could do but stick out a limp hand and fall to the ground, powerless to do anything to prevent his goal being breached a second time.

Balotelli was booked for removing his shirt as he attempted to celebrate with a moody pose.

He could not keep it up though and broke into a broad smile as he was engulfed by ecstatic team-mates.

It was a performance that put English efforts - and Ireland's for that matter - into some kind of perspective.

Germany though were a shadow of their normal selves.

Twice in the opening stages Gianluigi Buffon had fumbled close to his own line but they could not take advantage.

Sami Khedira did launch a volley towards goal in between Balotelli's brace, but on that occasion Buffon was able to make the save.

The change brought some much-needed life into German ranks.

However, their efforts at hauling themselves back into the contest were repeatedly thwarted.

Lahm failed to hit the target after running onto Toni Kroos' return pass before Buffon pushed Reus' free-kick against his own bar and away to safety.

A disappointing Ozil surged to the by-line but, with hardly any room, Khedira needed to react far quicker than he did to the near-post cut-back.

Balotelli's exit with cramp meant he was denied the opportunity to become the first player to score a semi-final hat-trick since Gerd Muller did it in 1976.

His replacement, Antonio Di Natale, should have wrapped up victory when he found himself in acres of space inside the box, but dragged his effort wide of the far post, much to Balotelli's frustration.

Federico Balzaretti's handball in the final minute did provide a few nerves for Italy as Ozil fired home from the spot.

But Prandelli's men were able to reach the final whistle and celebrate their triumph.