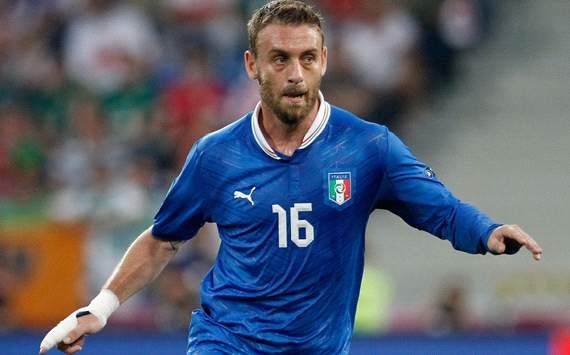 Pirlo has been the focus of much of the build-up after his influential displays so far and Sunday's stunning scooped penalty in the shoot-out success over England.

De Rossi has nothing but admiration for the Juventus midfielder but he was also keen to point out that Cesare Prandelli's side have many strings to their bow.

"We don’t have any specific plans for our individuals but of course when there is a genius in any side like Andrea, the opposition are always going to keep a closer eye on him," the Roma midfielder told reporters.

"We will see if I can benefit from having more space but we have other players who can hurt Germany, even if Pirlo has been the most consistent in his genius."

De Rossi also spoke of the mercurial striker Mario Balotelli, stating that he will be treated as a member of the squad, and insisting that he is not a problem for the team.

"We just treat [Balotelli] as one of the squad, nothing more and nothing less. Whether we need to look after him in a particular way is up to the coach because he looks after us all as individuals.

"We talk a lot about Balotelli because he’s a very good player, he's not a difficult character at all.

"At the end of the first-half against England we spoke and there was no problems whatsoever. These reports of fights between us are certainly not the case.

"I've shouted at my team-mates thousands of times in the past. I thought he was terrific against England."

De Rossi is a doubt for the game in Warsaw with the sciatic nerve problem that forced him off in the quarter-final victory over England.

However, the 28-year-old is optimistic about his chances of passing a late fitness test, admitting that he would be willing to play through the pain.

"I would hate to miss out because of an injury," De Rossi confessed. "We have a squad of 23 players who can play, and everyone wants to play. It's not that I'm a hero, I just hate missing matches.

"No-one wants to miss games like this, especially Italy against Germany with a chance to get into the final. I don’t need to explain how important it is to me and my team-mates.

"I've got a bad back but I'm confident I can play. We are going to have a late fitness test but, of course, I will do everything in my power to make sure I'm fit."

De Rossi also stated that the match will be different to when the two sides last met in the 2006 World Cup when Italy came out on top thanks to goals from Fabio Grosso and Alessandro Del Piero, and that he is enjoying being a part of the side.

He stated: "The game in 2006 is a different game. It’s not 30 years ago but it’s a different generation and different players. We were playing in Germany and everyone thought they were going to win the trophy - and it didn’t happen. I think it’s going to be another historic game tomorrow.

"I feel very comfortable in this national side. I always look at the situation I’m in and enjoy myself when i go out to play football. It’s a very organised team and it is a lot of fun.

"You have even more fun when you get positive results. How can you not have fun? How can you not enjoy it? it’s a real privilege to play for such a big and important side.

"The only thing we've got at our disposal is to keep the ball. If they press us high up the pitch, the only way to resist is to keep the ball and get out from the pressing. Germany are very organised in their pressing and we’ve seen that in other games in the championship.

"We can't change the approach we've taken in the last two years. It would be useless to do that. We've got to try and take our chances. Perhaps we won't dominate the play like we did against England because we're coming up against a stronger side. It's going to be an open game, a terrific game."

Italy's last-four encounter with Die Mannschaft will kick off at 20:45CET.